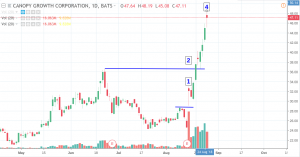 Canopy reached an all time high of 45.92 last Friday, August 24. The initial breakout (notice the breakout gap) from what appeared to be a downtrend (earnings wasn’t very stellar either) took place on August 15 when Constellation Brands announced its massive investment in Canopy (1). Price followed through three sessions later (2) starting with a runaway gap which then broke above its then all time high of 36.55 on increasing volume (3). With today’s high (4) potentially continuing last week’s exceptional week for Canopy, we are looking for the price to correct and to establish its next swing low;  should this stock remain in an uptrend, that swing low may prove a critical technical level that should remain unviolated by a close to the downside. 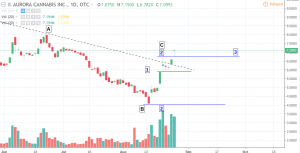 Aurora Cannabis exhibited a price surge (1) and (2) on relatively high volume; a surge consisting of two consecutive gaps (which generally is would be a strong bullish indication). Notice that even the bulls were hesitant at (2), as indicated by the doji bar at a point where the intermediate-term downtrend line would have (and still might) act as a resistance level. Despite the bullish price action, ACBFF can still be considered in a “technical” downtrend, as made evident by the set up (A-B-C). We’re looking to see where the next swing point will land and whether the following price action will break above the resistance level at (2) or whether it breaks below the new swing point and below the swing point at (B).

GWPH is showing signs of a clear technical downtrend. Just notice the sequential lower highs and lower lows. IF the downtrend were to continue, we’d expect the bears to pursh price below the 125.50 swing low, possibly toward 119.70. If price were to change or even reverse, it would have to break above 146.34. Possibly encountering resistance at 152.50. A break above that level would signal a potential end of the current downtrend. 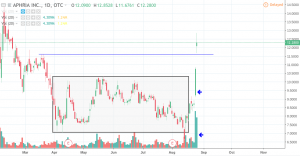 Another cannabis stock that has had a major surge on high volume, Aphria appears to have cleared its four-month trading range in addition to opening above its 11.58 resistance level. Possible due for a pullback, we are waiting to see if APHQF will remain above or bounce back from either level. Should the bulls take charge, we can see Aphria potentially challenging its January high of 19.86. 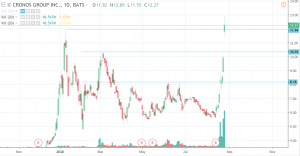 At the time of writing Cronos Group had a dramatic surge into record-high territory, opening and exceeding three resistance levels at 8.15, 10.39, and 11.90; the last level representing the stocks January high. As with all breakout levels, we are waiting to see the whether the pullbacks might hold or bounce above previous resistance levels and whether price will exceed its current highs, leading Cronos into new bull territory, and potentially marking the start of a new uptrend. 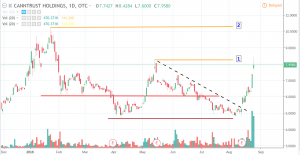 Similar to its competition, CannTrust too is surging ahead on high volume, having broken through a three-month downtrend.  It appears to have exceeded its May high of 8.25 but is currently struggling to hold that level. Should it advance above this range, it is looking at potential resistance should it challenge its January high (which happens to be an all-time-high) of 10.24.

One of the newer companies on the scene, Green Organic Dutchman has been on a clear and steady downtrend since it failed to hold support at 4.55 in June. Breaking out of a two-month downtrend on relatively high volume (1), TGODF sees its next major resistance level at 5.22 (2) should it maintain its current upward momentum from what appears to be its initial breakout.